The Mazda Road to Indy has enjoyed being an integral part of the Month of May in the lead up to the Memorial Day Classic. This year, as part of what has been dubbed the Mazda Road to Indy FreedomFest, the Cooper Tires USF2000 Championship Powered by Mazda and the Pro Mazda Championship Presented by Cooper Tires ran the Mazda Freedom 75 and Mazda Freedom 90, respectively, at the Lucas Oil Raceway at Indianapolis on the Saturday afternoon prior to Race Day for the Indianapolis 500 Mile Race. The third part of the FreedomFest was the IndyLights Freedom 100 was held at the Indianapolis Motor Speedway on Carburetion Day.

The USF2000 and Pro Mazda events have traditionally been held on the night before the Greatest Spectacle in Racing, and I for one am grateful it’s now the Day Before the 500 rather than the Night Before the 500. In past years, being out at the track until 10:00pm to 11:00pm at night only to wake up a few short hours later at 3:00am to make it to the Indianapolis Motor Speedway before the all the insane traffic arrives made for a brutal weekend. There wasn’t enough coffee in the Media Center for that level of grogginess. This year, with the Pro Mazda Race ending at 3:30pm in the afternoon, Race Day Morning for the 500 was far more tolerable.

The USF2000 Mazda Freedom 75 race was thankfully incident-free. This certainly hasn’t always been the case. There have been years when the infield at Lucas Oil Raceway looked like a Van Diemen junkyard, but the current crop of USF2000 drivers are remarkably disciplined. The fast way around the 5/8-mile oval is not a typical start-wide-apex-low-exit-wide line like it is at most ovals. The optimum line is right next to the wall all the way around. It takes a lot of courage and confidence to run at the limit of grip inches away from the wall, even if it is a SAFER Barrier. 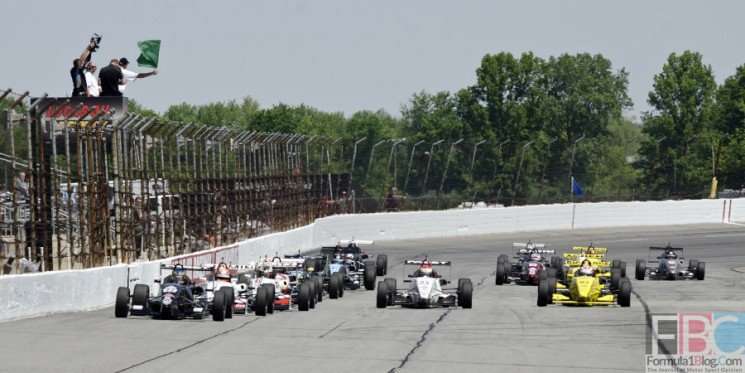 Nico Jamin and Aaron Telitz of Cape Motorsports with Wayne Taylor Racing both did a great job staying high and fast during the morning qualifying session. Nico claimed top honors securing the position for the afternoon race, and Aaron starting right behind him in P3 on the outside of Row 2. Yes, I did type that correctly, the OUTSIDE of Row 2. Remember the fast line is next to the wall, therefore the preferred starting position is on the outside row of the grid, not the inside as is typical. Thwarting the Cape Motorsports sweep of the front row was Pabst Racings, Jake Eidson who qualified P2. 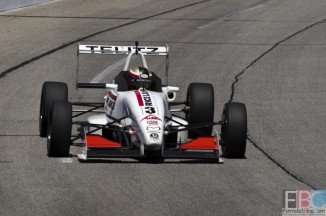 Eidson’s position improved immediately upon the waving of the green flag and took over the race lead as the field dove into Turn 1. Jake would keep his lead over Nico, although he would never break free of him, for the remainder of the 75-lap race. The gap as they took the checkers was 0.5834 seconds. A little more than four seconds back was Telitz who cruised to an easy third-place finish nearly 15 seconds ahead of the next closest competitor, John Cummiskey Racing driver Anthony Martin. 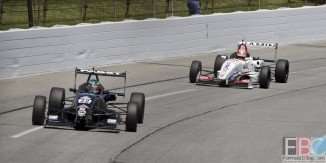 “We made a good start and got ahead of Nico going into Turn One. I knew that traffic would be the highlight of the race so I had to focus on getting through traffic as fast as possible and not making any mistakes. I had to pace myself – set a pace and work off of that. The track got very slippery as the race progressed so I had to focus on that as well. It was a bit sketchy at times in traffic, but everyone drove cleanly and the Pabst Racing guys gave me a great car that made it really easy to pass in traffic. I’m really relieved to get through it nice and clean and with the car intact. It was a great race but we’re still behind in points. This is one of those races that takes us one step closer so we’ve got to keep the momentum going.” – Jake Eidson, #22 Pabst Racing 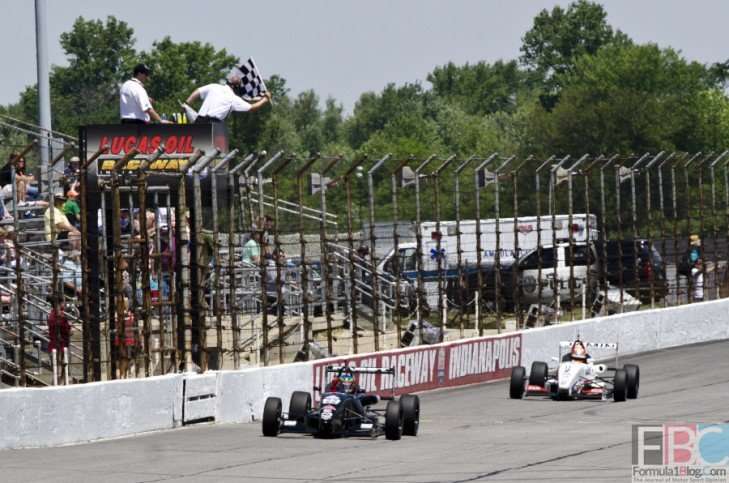 The victory by Jake Eidson on the only oval of the USF2000 season helps the Pabst Racing hot shoe close the gap to Cape Motorsport’s Nico Jamin. With Nico finishing in second and a dismal result during Race #2 on the Indianapolis Motor Speedway Infield Road Course earlier in the month, Eidson still couldn’t overtake Jamin in the overall season points. Nico still holds a 233 to 218 point lead over Jake. Aaron Telitz, who has been Mr. Consistency this season, is right on Jake’s heels with 203 points. With the oval racing behind them, the USF2000 drivers are now off to the treacherous trafficways of Toronto where they will join the rest of the Mazda Road to Indy and the Verizon IndyCar Series on June 12-14. With the weekend featuring a double-header, the complexion of the championship could be very different leaving Canada than it is going into it.

Other than for reasons of convenience, did in your opinion, the event work better as a daytime event, compared to the traditional night before the 500? Did more people come out to the event? The grandstand looks quite sparse but do you think that will develop easier, now its a daytime event, in bringing people back?

The feature image I took was during morning practice and qualifying, so it’s not perfectly representative of the turn out. Also, most of us prefer to sit in the grass above Turn 1 (where the feature photo was taken). The turn out was not as good as last year, but it still wasn’t bad. I think it will improve as people get used to the new time as some were caught off-guard by the change.