Today was the first day of the 2015 Team Cooper Tires Mazda Road to Indy Winterfest at NOLA Motorsports just outside of New Orleans, LA. The morning began with the Indy Lights drivers finishing their last 3-hour testing session, as the Cooper Tires USF2000 Championship Powered by Mazda teams and drivers prepared their machines to race in competitive anger for the first time since the 2014 season finale at Sonoma Raceway on August 23rd.

A six-month absence from the track is tough, but the stalwart Cape Motorsports with Wayne Taylor Racing team along with their veteran drivers Nico Jamin and Aaron Telitz proved in Practice Session #1 that they were more than up to the task. Jake Eidson of Pabst Racing was the only other driver to be in the 1:36 range with Nico and Aaron. 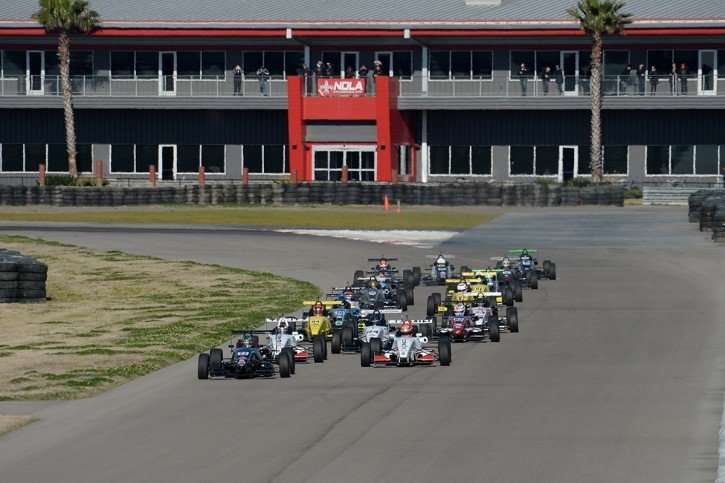 The Pabst Racing squad had to seriously scramble to get the clutch swapped out, the car back together, through tech, and ready for the race. Not only did they manage to get the car to the grid on time, but they put a fantastic machine under Jake Eidson who cruised to a flag-to-flag victory finishing 3.4422 seconds ahead of 2nd place finisher Aaron Telitz. 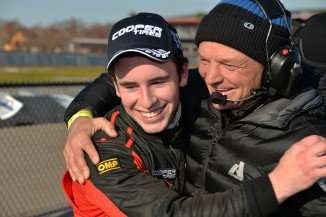 I felt some pressure early on from the Cape cars behind me, but I knew we were pretty quick down the straights, so I had to keep cool and not make any mistakes. To pull out the first win of the season was the goal, so it’s a great feeling. We worked so hard last year to get to the top spot. Hopefully this will be the first of many! — Jake Eidson, #22 Pabst Racing

Aaron Telitz quickly got around his teammate, Nico Jamin, and started to apply pressure Jake. NOLA is a very difficult circuit to make a pass, and overtake opportunities have to be planned carefully, and executed precisely, if they’re to stick. Aaron pushed a bit too hard and nearly tossed away his P2 position, falling back into the grasp of Nico. For the remainder of the race, Aaron was on the defensive, but managed to hold the charging Nico.

“It was a lot of fun. I made a mistake on lap five, trying to stay up with Jake and put pressure on him. Once I made that mistake, I fell back to Nico and pretty much had to fight to hold him off the rest of the race. It’s good to start the season on the podium, but there’s a long way to go.” — Aaron Telitz, #3 Cape Motorsports with Wayne Taylor Racing

One down and two to go at NOLA Motorsports Park, then it’s off to Barber Motorsports Park next week for the final three races of the Winterfest mini-series. Tomorrow begins with a warm-up session at 09:00 CST with the green flag dropping on Race #2 at 10:15 CST and Race #3 at 14:30 CST. You can follow live timing & scoring as well as chat with other fans and race officials at http://usf2000.com/results/live-timing.