With Manor now looking beyond saving due to the excessive costs of competing in Formula 1, I thought it would be a good time to examine the amount the teams spent during 2016 and the return that they got for their investment.  The teams’ 2016 budgets were published in AUTOSPORT in December 2016 and are given as follows (in millions of pounds): 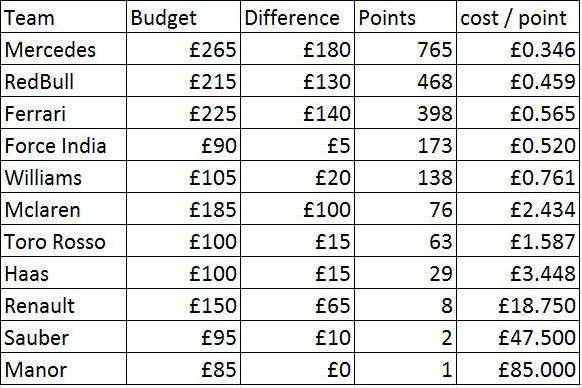 The Mercedes and Ferrari costs exclude the Power Unit development costs to try and make the comparison with other teams consistent.  However the costs for McLaren and Renault may well include their Power Unit development costs, this skews their results.  Simplistically this gives Mercedes as the most efficient team (thanks to the margin that they dominated the others) with each of their points costing £346 thousand, while Manor are the least efficient with their single point costing £85 million.

In Ross Brawn’s book; Total Competition, he states that at the teams he worked in he set a limit that each tenth of a second improvement in lap time should cost less than £100 thousand.  That is the cost of staff, machinery and materials to develop the car and manufacture the parts to get that tenth of a second should be less than £100,000.00.  He does also state that spending a million extra does not equate to a car going a second a lap faster, otherwise the Mercedes should be three minutes a lap faster than the Manor.  It is however an interesting figure that Brawn used when signing off developments at Ferrari, Brawn and then Mercedes.

Looking at the fastest laps set by each team over each race weekend in 2016, and comparing them to the fastest time set by the Manor team, we can see the percentage improvement each team has of the poorest funded team on the grid:

Unsurprisingly this shows that Mercedes were clearly fastest at all events apart from Monaco where Daniel Ricciardo managed to get on pole position. Qualifying is normally the fastest single session over the weekend, except when it rains.  Also of note are the times when teams ended up slower than Manor (Sauber and Renault being the most often beaten by Manor, but Haas, Toro Rosso and McLaren were also beaten on at least one occasion).  Austria, Belgium and Italy were Manor’s best Grands Prix in terms of speed where they got to within 2% of the fastest and/or were faster than the slowest by over 1%.  Starting out 5.4% slower than Mercedes, and finishing 3.07% slower, they averaged 3.62% off the fastest team.

If we use a 0.1% improvement in lap time over the lowest funded team as the measure, the graph of cost to provide that improvement is as follows:

This shows some very large costs for McLaren, Renault and Haas.  For Renault and McLaren this may be as a result of the Power Unit development costs being included in the teams overall budget (but the figures from AUTOSPORT do not estimate how much this is.  Negative points on the graph show that Manor were faster at the Grand Prix in question.  Zooming in, so that the detail is visible for the other teams looks like this:

Again, McLaren and Renault look very expensive for the improvements that they have managed over Manor most likely because of the included Power Unit development costs.  Red Bull, Mercedes and Ferrari all follow a similar trajectory with Ferrari averaging a cost of £503 thousand for each 0.1% improvement with Mercedes and Red Bull spending £498 and £463 thousand to get a similar improvement.   Sauber’s improvements cost a similar amount at £412 thousand while Hass, Williams and Toro Rosso are close to Brawn’s target of £100 thousand for each tenth of a second gain (0.1% would be a tenth of a second for a 1 minute 40 second lap.  Force India though were remarkably efficient, with each 0.1% improvement over Manor costing a quarter of Ross Brawn’s target. 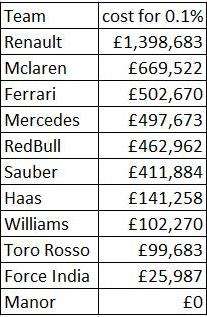 While it may be too late to save Manor, if Brawn can persuade the FIA to write the future regulations such that teams cannot get the lap time improvements at the current rate by simply spending more money, then we may get an effective cost cap.  If instead of spending half a million per tenth of a second improvement, top teams need to spend two or three million to get the same return, we may see an effective cost cap.  Yes the likes of Ferrari, Mercedes and Red Bull will always be able to spend more that the less well funded teams, but if they do not see the return in terms of lap time then the more efficient smaller teams may be able to win the odd race.

Nice observation, but next time put units at the axes of the graph.. x-axes is obvious, but at the Y-axes it would be very helpfull.
It is the first comment I get everytime I present data and observations at my job.

Very interesting reading since the situation with money and costs is an ongoing concern in F1. Infact, F1 Racing magazine did a similar article (although not as in depth as yours) in their December issue titled Big Bang Theory where they divided each team’s budget by their position in the championship and Force India came out on top with a cost of £12.9 million per position from a budget of £90 million compared to Mercedes £23 million per position from a budget of £230 million. I love reading about this sort of thing, keep up the good work.

The return in lap time vs $ spend reduces the longer a set of technical regulations is in place as there are less areas of investigation to find improvement. So what does the FIA do when the lap time deltas across the field start closing up? Answer: Substantially change the technical regulations…..